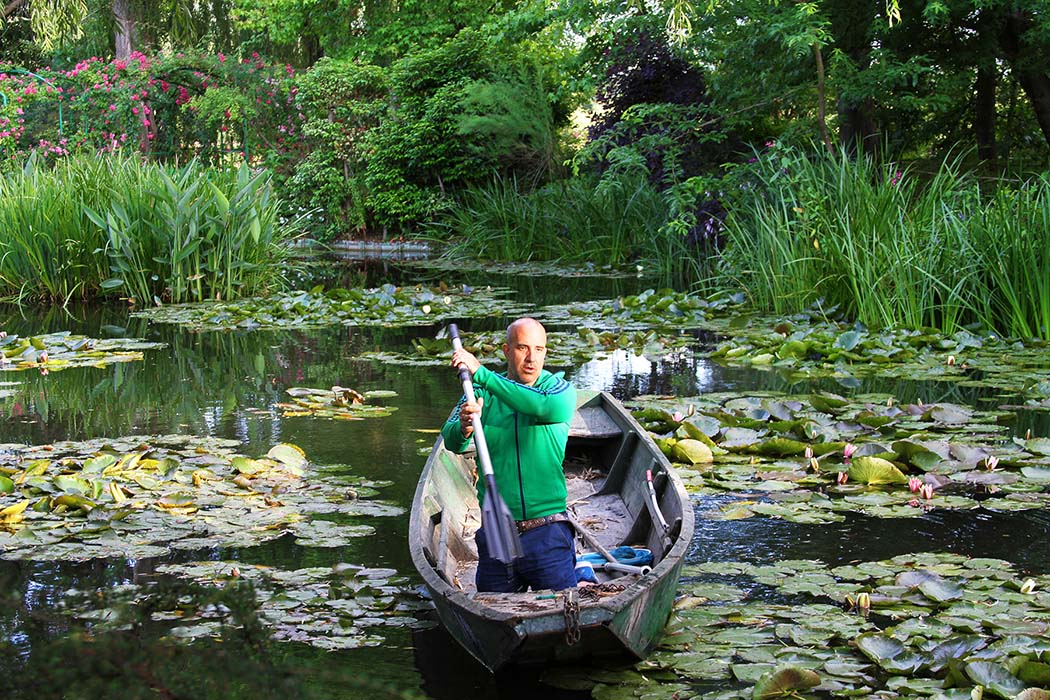 In 2012 I was awarded a residency, by my friend Beth DeWoody, to live and work at Claude Monet's home and garden in Giverny, France. I prefer to photograph my subjects outdoors in existing light, but due to the stormy weather of Normandy, I spent much of my time inside my room, contemplating the red and white design of the toile de Jouy wallpaper. In exploring this visual obsession further, I purchased a similar toile de Jouy wallpaper at the local home goods store in Vernon, my go to spot for most art supplies. I began to play with the wallpaper. The material aligned nicely with my ongoing interest in inside versus outside, or rather what “belongs” where, as classical toiles (as they are called) are an abstraction of pastoral scenes, which are designed for interiors. I started by photographing the wallpaper down in the water garden, draping it in the trees, I hung it out of my bedroom window. I also brought vines from the garden indoors to my studio and hung them up. None of these actions satisfied me, so I decided to print some of my portraits directly on the wallpaper itself. Now I felt I was on to something exciting! My contemporary subjects were able to mingle with and exist in the fictitious world of idealized classical pastoral abstractions of the toile de Jouy "reality", while collaborating with the readymade pattern of an anonymous designer. Collage has always been very much part of my practice - my previous series being "Photos re-photographed”, where I photographed my own printed works in various contexts, most often in a landscape, my preferred context. The photo of the photo becoming the finished art work.

So back to the toile works, and my Giverny studio. I next printed my photos directly on toile de Jouy fabric. My goal during this 6 month residency was to focus solely on process - with no concern for the outcome. The way the skin of the subjects in the photographs intermingled with the "skin" of the fabric, with the weave itself really resonated with me. I developed the concept further by exploring the wonderful fabric stores of Paris, Monmarte. In hindsight these excursions reminded me of the excitement and discovery I would find on trips to the fabric store with my mother as a child. I feel most artists discover what their work is concerned with at a very young age. A predominant focus of my work has always been performance, and these new works synthesized my love of performance, design, readymades, and representation.

Some thoughts on the work from artist Jim Hodges:

...Fantasy and play are both present in these creations....the artist is drawn to beauty, a kind of distancing beauty associated with fame and "perfection" that isolates us from it. Never do we occupy the seat of the voyeur more than when in the presence of ideal human beauty especially when it's glazed in fame....what does it mean to veil these bodies, to embed them in a field of bucolic idealism, tattooing them and at times disrupting the beauty to the point of overpowering it...a wrestling match between subject and ground...the threshold to the endless possibility of casual and playful juxtaposition...a conjured world that finally liberates these isolated subjects from the prison of Mt. Olympus and drops them into a world  integrated and animated by fantasy, where "beauty" is relegated to the service of play and imagination.... 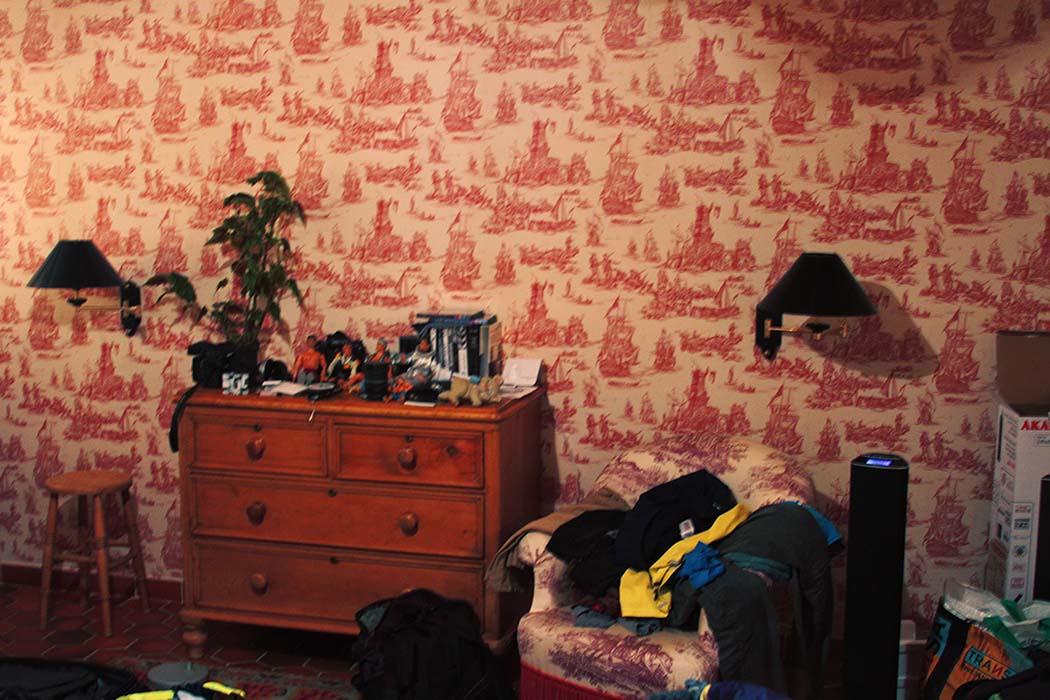 THE RED ON WHITE TOILE DE JOUY WALLPAPERED ROOM IN WHICH TIM LIVED GIVERNY,  WHICH WAS ALSO THE MOST DIRECT INFLUENCE ON THIS PHOTO ON TOILE DE JOUY BODY OF WORK